Red Sovine released the song “Phantom 309” in 1967, almost a decade before CB truckin’ songs became super popular. It’s about a haunted 18-wheeler. The song is a first-person narrative by a hitchhiker who’s trying to return home from the West Coast. After three days, at a crossroad in the pouring rain, he flags down a tractor-trailer driven by a guy named “Big Joe.”

Big Joe drives through the night and drops the narrator at a truck stop, flipping him a dime for a cup of coffee before heading off into the darkness.

The narrator walks into the truck stop and talks to the waitress about Big Joe’s generosity. She lets him know that he was picked up by a “ghost driver,” and that ten years earlier, at the very same intersection where he was picked up, Big Joe swerved to avoid hitting a school bus full of children. He lost control of the truck and was killed in the wreck.

Tommy Faile wrote the lyrics to Sovine’s single in 1966. The song was covered by dozens of artists afterward, including Jack Bond, Dave Dudley and John Waits.

Whether or not you believe the urban legend part about being picked up by a phantom trucker is up to you, but the story of the crash itself is true.

On January 29, 1963, John William “Pete” Trudelle drove a tanker truck to the Chelsea River Bulk Petroleum Facility north of Boston to load up on 4,600 gallons of gasoline. Trudelle turned around and started to make the several-hour trip back to Keene, New Hampshire, near the eastern bank of the Connecticut River, just across from the state of Vermont.

He started up Route 1, just north of Boston in Saugus, Massachusetts, on the Newburyport Turnpike.

There was no way Trudelle could stop. Rather than plowing into the back of the two vehicles stopped, he crashed the tanker into the bridge abutment. Trudelle was unable to escape the cab as the 4,600 gallons of gas erupted. The driver of the car, Robert Mayer of Stamford, Connecticut, tried to escape, but was overtaken by the flames.

The bus was engulfed in flames, but the six children and the driver on board had time to escape. About 10 seconds after the passengers and driver got out, the bus burst into flames. The heat of the fire was so intense that steel girders on the overpass buckled from the flames. 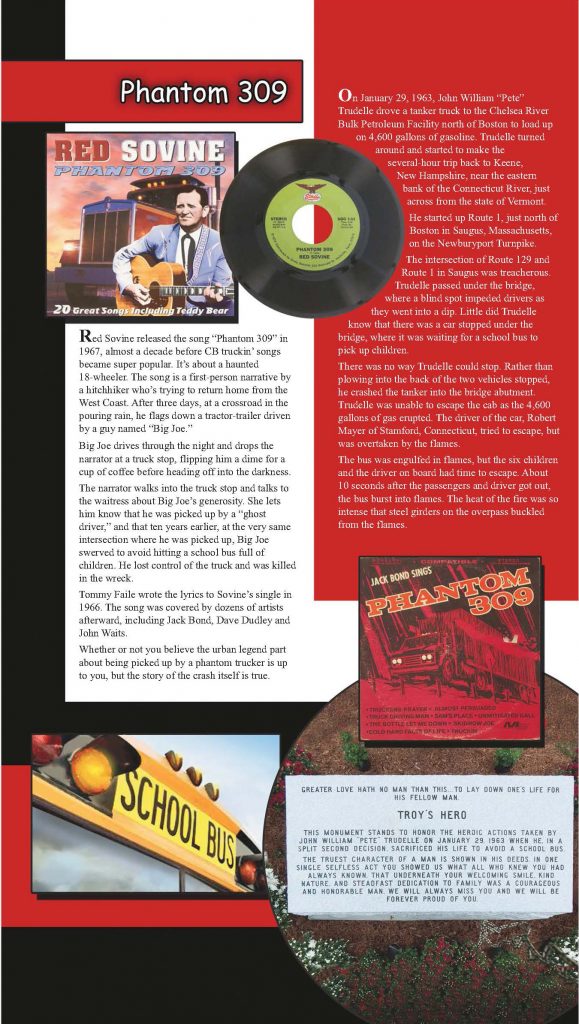