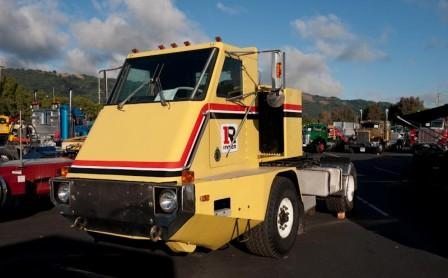 The Iowa 80 Trucking Museum now has a Paymaster Truck on loan from the American Truck Historical Society for a limited time. There were only 14 Paymaster Trucks produced from 1970 to 1980. This specific truck is one of 10 that were produced for Ryder, between 1974 and 1975. The Paymaster was designed to be more versatile, improve the ride for the driver, and reduce labor costs through a simpler engine design with easy to replace components. The unique look of this truck was designed to be more aerodynamic and succeeded in reducing fuel costs by 40%, over other work trucks of the same time period. The Paymasters only had two axles but could do the same work and haul the same payload as a standard 3 axle truck. The low numbers of Paymaster Trucks produced makes this truck extremely rare, and the Museum is so glad to have the opportunity to display it.

WALCOTT, IOWA —  Iowa 80 Trucking Museum will host a 100th Birthday party for its 1912 Saurer and 1912 Mack Jr. trucks on Friday, July 13th at 2:30 pm.  The event will coincide with this year’s Walcott Truckers Jamboree, July 12-13.  The public is welcome to attend the celebration.

“It’s very fitting that we are celebrating both the Saurer and Mack Jr. trucks, since both nameplates were forerunners to the Mack trucks we see on the road today.”  says Dave Meier, museum curator.

The Mack Jr. Model was the first one that Mack produced that had the steering on the left side.  Prior to that, all trucks had the steering wheel on the right; the same side horses were driven from.

“The truck was in disrepair when we acquired it.  The restoration took over two years and this truck is only one of three Mack Jr. trucks known to still exist,” says Meier.

Saurer trucks were first imported in 1908.  United States assembly started in 1909 in Plainfield, New Jersey.  According to Meier, this particular Saurer truck is the only American made Saurer known to exist.

The Iowa 80 Trucking Museum Has Joined The “Blue Star Museums”

The Iowa 80 Trucking Museum is now part of the “Blue Star Museums”: a collaboration among the National Endowment for the Arts, Blue Star Families, the Department of Defense, and more than 1,500 museums across America to offer free admission to all active duty military personnel and their families from Memorial Day through Labor Day 2012. The complete list of participating museums is available at www.arts.gov/bluestarmuseums.

Ever wonder what is the under the hood a 1956 International? Stop by the museum and see a replica of the engine. 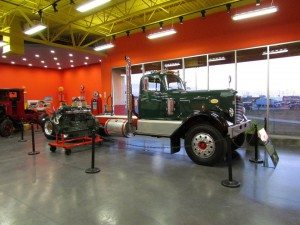 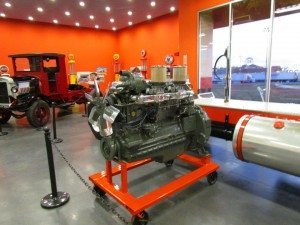 WALCOTT, IOWA — Iowa 80 Trucking Museum is currently expanding the museum by adding on to the current truck Exhibit Hall.  The new addition will add an additional 21,600 square feet to the Exhibit Hall.  “We have more trucks that we want to share with the general public and this expansion will allow us to do that, as well as display select trucks that have been graciously loaned to us,” says Dave Meier, Museum Curator.

When complete, over 60 trucks will be exhibited at one time, double the current display.  “We will also be adding air conditioning to the entire Exhibit Hall,” says Meier. “Being able to control the building climate will not only make it more comfortable for our visitors, but will also help preserve of trucks on display.”

WALCOTT, IOWA —  Iowa 80 Trucking Museum will host a 100th Birthday party for its 1911 Walker Electric Truck on Friday, July 15th at 2:30 pm.  The event will coincide with this year’s Walcott Truckers Jamboree, July 14-15.  The public is welcome to attend the celebration.

“Many people think that electric vehicles are a recent invention, when in fact they were in production over 100 years ago.” says Dave Meier, museum curator.

The Walker Vehicle Company was based in Chicago, Illinois and manufactured electric vehicles until late 1941. Walker trucks were used mainly as delivery trucks in major cities; delivering ice cream and other dairy products, baked goods and dry goods. This particular truck was owned by Bowman Dairy and used to deliver milk to hospitals, restaurants and hotels.  Electric vehicles were popular in the late-19th century and early 20th century, until advances in internal combustion engine technology and mass production of cheaper gasoline vehicles led to a decline in their use.

Iowa 80 Trucking Museum purchased this particular truck at an auction several years ago.  It is one of only a handful of Walker Electric trucks known to still exist.

In April 1983, truck 414-3001, a Ford Model 8000 cab-over tractor, now affectionately known as “Ole Number One,” rolled off of the assembly line and went into service at Con-way Central Express, a regional motor carrier start-up launched by the then  Consolidated Freightways, Inc. Now, 28 years later, a commemorative ceremony will be held to mark the donation of this original truck — which has been completely restored — to the Iowa 80 Museum by Con-way Freight. The event will feature the truck’s original driver — who still drives for Con-way — and the driver’s freight operations supervisor from those early years, who rose to become president of Con-way Central Express and chief operating officer of Con-way Freight before retiring last year. The truck will be on display at the event.

Our 1958 Bullnose Kenworth along with the former owner, Ray O’Hanesian, is featured in a new show on the Speed Channel – American Trucker. Check it out!

You can watch a link to the video here: http://www.speedtv.com/programs/american-trucker/watch-video/

If you have a subscription to Wheels of Time – Make sure you check out the article about the Iowa 80 Trucking Museum.

It is featured in the January/February 2011 issue. You can also purchase “Wheels of Time” at the Iowa 80 Trucking Museum.